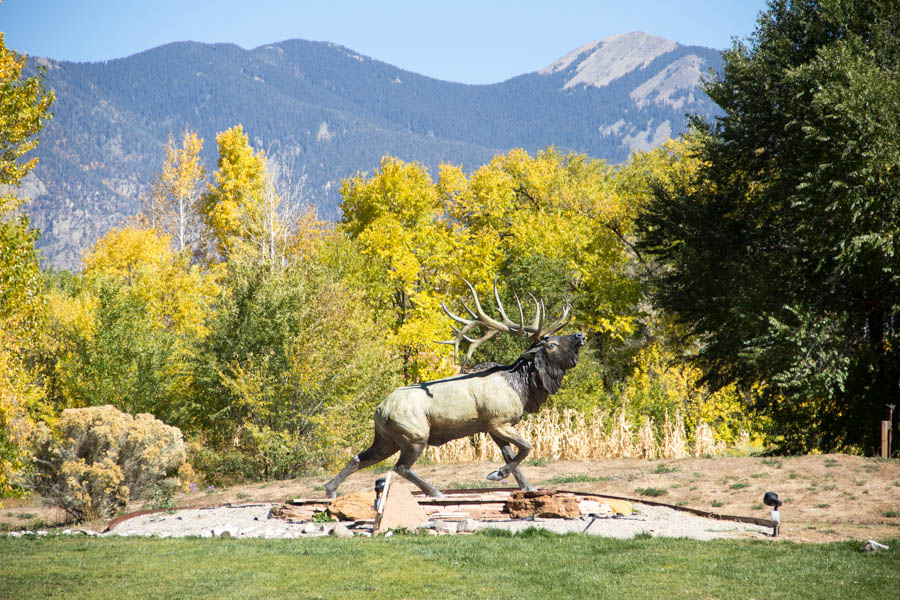 ( The view outside our room) This was just one small area of the expansive grounds at the hotel.

Hello Friends! Wow. We had an amazing trip! I have come back feeling motivated and refreshed. I went with my hubby, younger brother Matt, and his wife, Shannon. When we choose the hotel, The El Monte Segrado, in Taos, months ago, I knew we were in for a special stay. We were celebrating both our 15th Anniversary and their 3rd Anniversary, so we were due for some pampering, and it exceed our expectations! I knew I had to break down these blog posts into several posts as we had done so much in a matter of 5 days. I was pleasantly surprised that I was able to do as well as I did as we walked a lot, and did quite a bit. 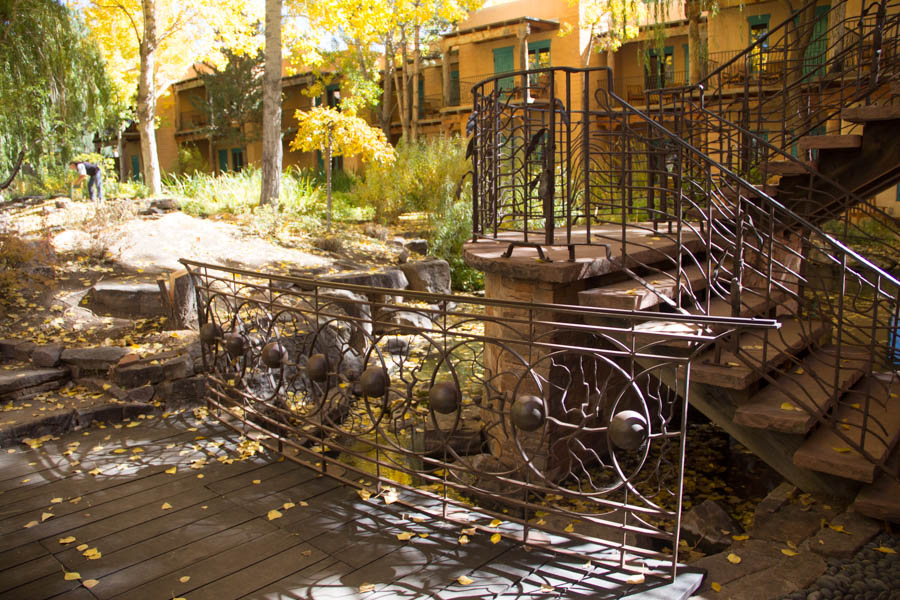 The grounds were spectacular! Golds and greens, mixed with bronze and browns from the hotel’s architecture and nature that surrounded us. I will share PART II of the trip next Monday, as we visited historic Vineyards, Taos Mesa Brewery, the Rio Grande, the Gorge, great places to eat, walked Canyon Road, saw the sights in Santa Fe and the jewelry/ art by the magnificent artisans. We enjoyed the Spa, the Hotel and it’s amenities and some really great food. So enjoy these pics, there will be more~ 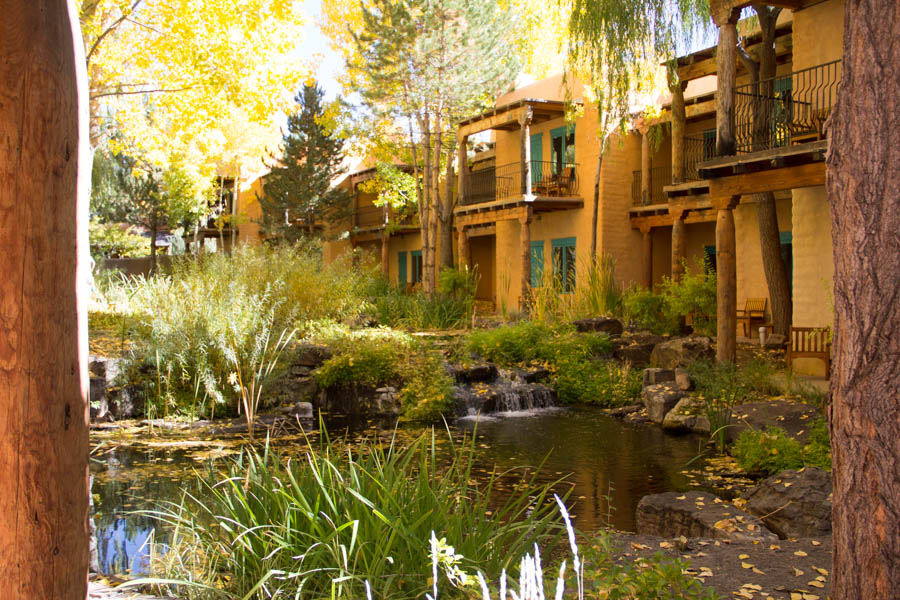 The hotel was in the New Mexico style, a large Pueblo building with many amenities and gorgeous details. We took so many pictures, it is going to take some time for me to go through them all. The entrance of the hotel lobby, was spacious, and we were told many people forget to look up at the swirl-like design, and the large antler chandeliers that adorn the hallways throughout the hotel. The rooms were quite large, bathrooms decadent, with a huge soaking tub, I would certainly enjoy each night! A western flair with brown and white fur on the cabinets, and turquoise adorned cattle skulls above the fireplace were indicative of the Taos style.

You bet I soaked in this tub each day!

The weather was perfect every day! Gold, green, and red trees throughout the grounds 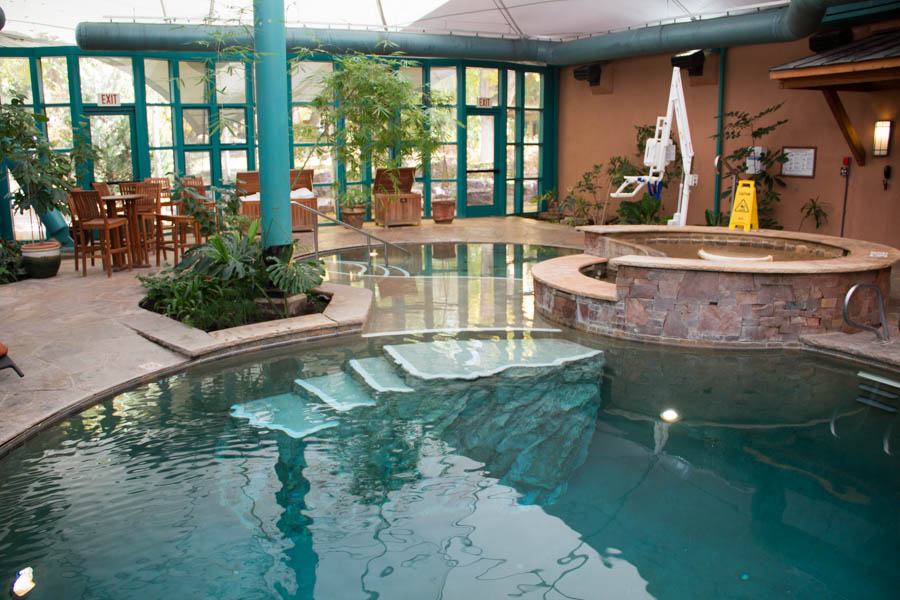 Where we took a dip the first night in the saltwater pool. This pool was 10 feet., Good thing I can tread water 🙂

Just one half of the room. The bathroom was divine! 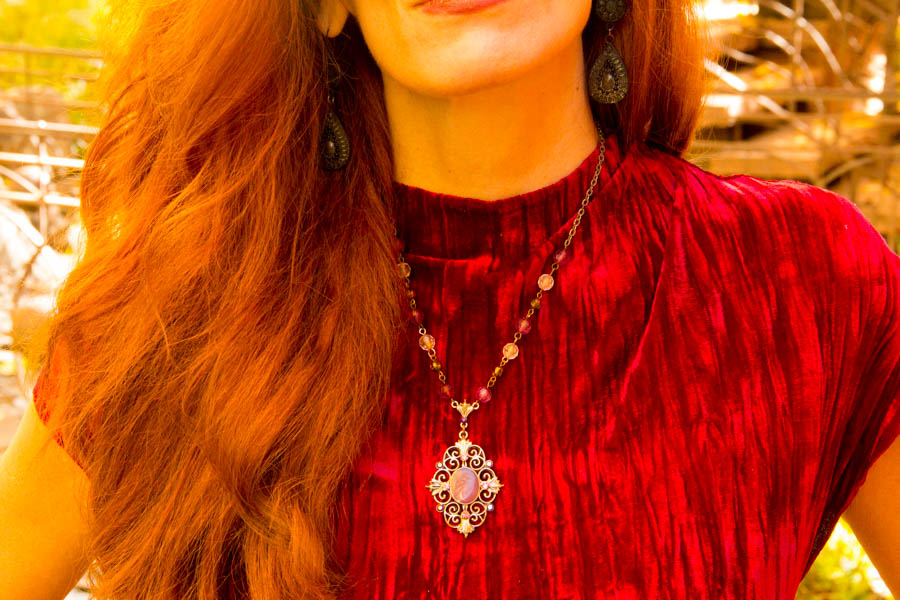 This is a vintage inspired necklace I love. However, I look forward to wearing and sharing with you the gorgeous opal necklace hubby bought me when in Santa Fe. I will tell you that story as there were so many jewelers and artisans in Santa Fe, where we spent the 4th and 5th day. 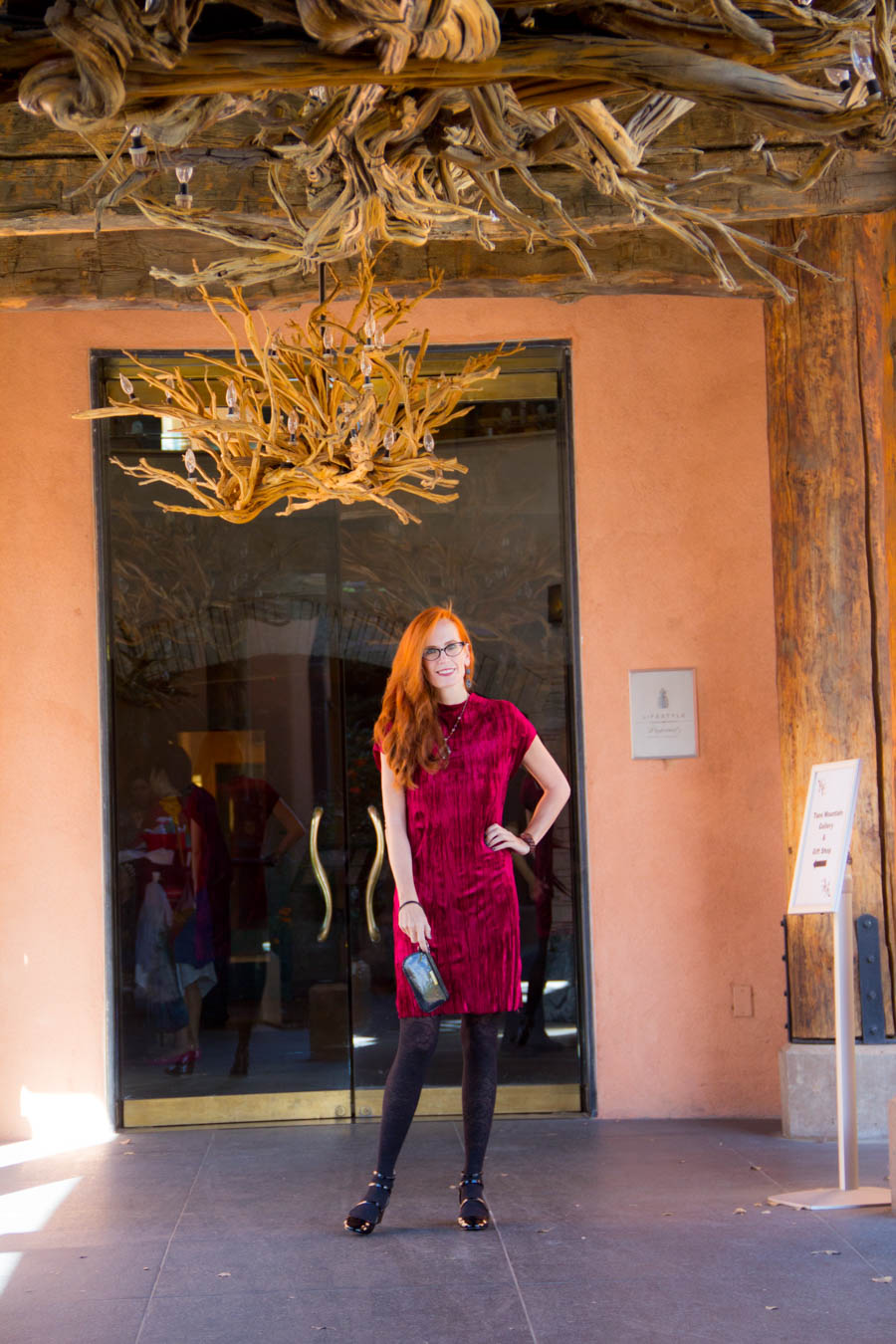 ( These antler chandeliers were throughout the hotel, this is the entrance! If I had a cabin, I would have one of these for sure!) This burgundy velvet dress is from Zara, and it is pretty basic here. I will be styling it again on the blog with jackets, more color and also worn with turlenecks underneath. 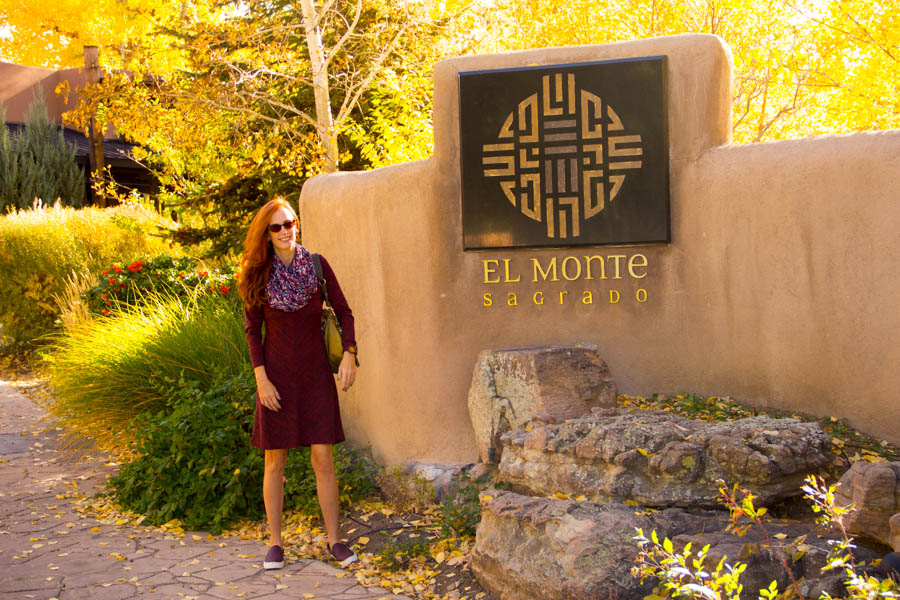 ( With all of the exploring we did, it was important I had on comfortable slip on shoes. I would go back to this hotel for sure!)

The first day, we took 2 planes, then arrived in Albuquerque and drove the long, beautiful drive known as the “Taos High Road”. The landscape was just amazing, with dry flat land dotted with green shrubs and surreal mountains. While driving this scenic route we stopped at a restaurant, as we drove through Santa Fe, called The Shed , authentic Mexican food  with our favorite beverage “The Prickly Pear” a magenta colored margarita. ( I would never have a margarita taste this good ( or strong, again!) it was delicious! I will tell you we went FULL CIRCLE as the same waiter waited on us the day we arrived and again as the day we left. 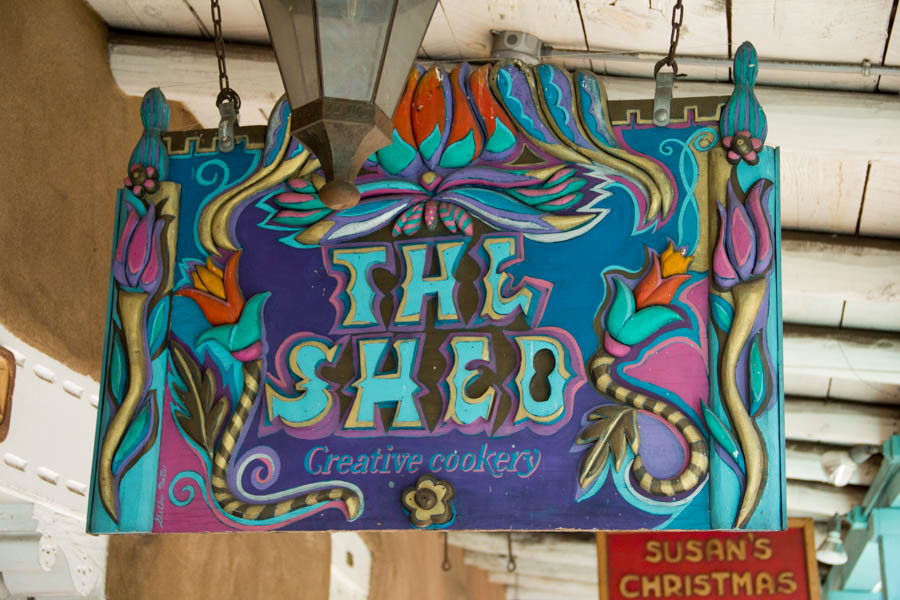 A bit about the restaurant, The Shed is world renowned for its red chile enchiladas and other blue corn specialties, as well as tempting desserts and, of course, margaritas! A dining tradition in Santa Fe since its beginning when Polly and Thornton Carswell opened it on Burro Alley. The Shed structure had formerly been used by wood gatherers to protect their burros while the “Lenadores” quenched their thirst in the cantina around the corner. 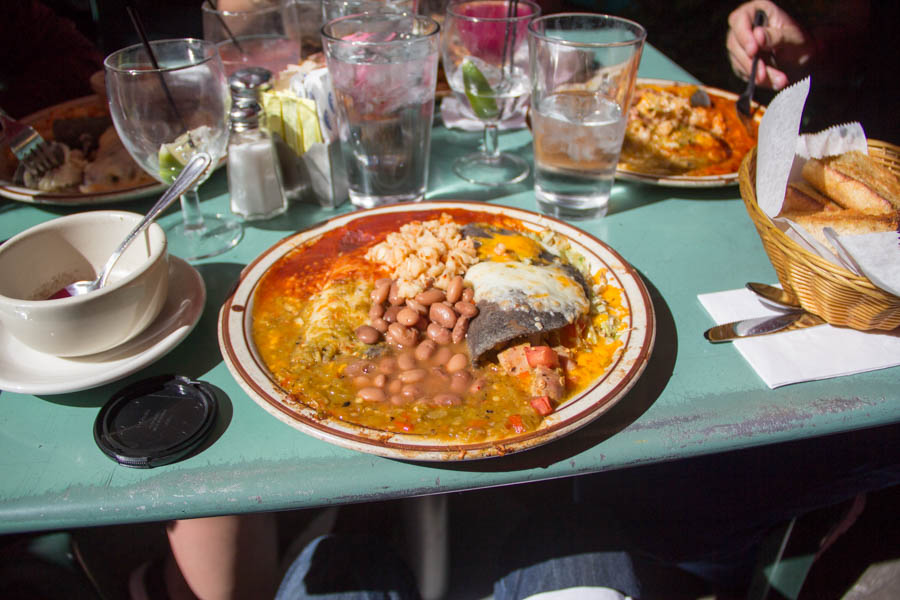 The food was so good! At the Taos Mesa Brewery, I had Mahi Mahi blackened fish tacos, here at the Shed, I enjoyed some enchiladas made with blue corn tortillas, and we had a “few” margaritas! Let’s just say we ate well on the trip. “The margaritas were our favorite, they were so good! 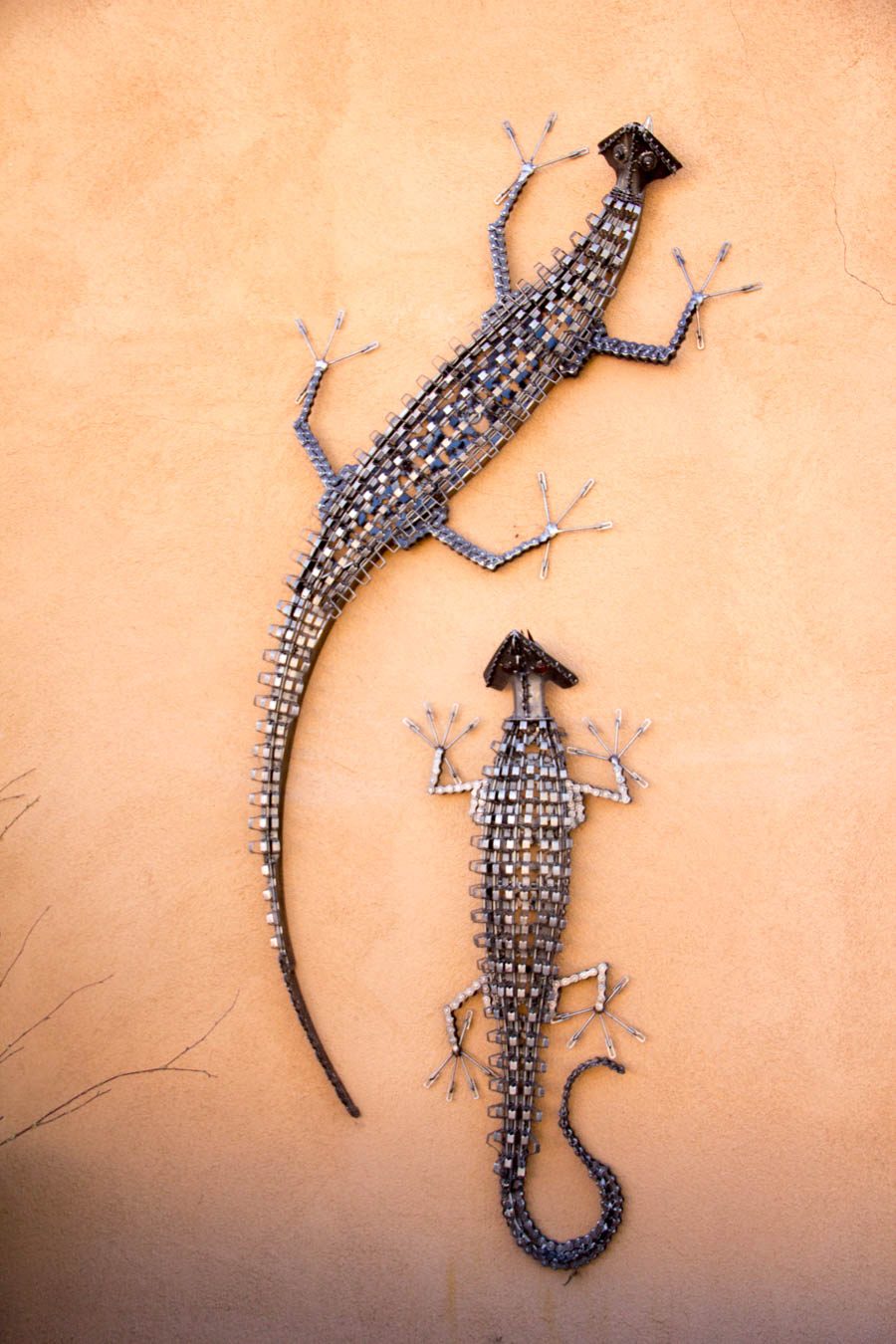 ( Would my HOA have a problem with these if I had them on the side of my house?)

Day 2 we had some pampering in mind, which was much-needed after all of the flying, driving and walking that was done the first day. We had a sumptuous breakfast, of waffles, Eggs Benedict with a spicy sauce, and colorful fruit, My sister in lawn, Shannon and I were excited about the beautiful spa and looking forward to our first facial. We waited in the quiet meditation room, sipping strawberry water and enjoying the atmosphere. We went into separate rooms where I experienced a sensory overload that I knew I was going to have to seek out a facial when I returned home. Layer after layer of various creams and serums, scents such as lavender, and calming new age music played on the speakers. Hot towels on my face were peeled off in a gentle motion, and later they would be used as wraps for my hands and feet.  Later we joined each other in another room, with fur blankets covering the cushioned chairs where we would both treat ourselves to pedicures. Navy blue was the color we both had chosen. This is only the middle of day 2.. More to come via INSTAGRAM and the blog, as we go.

The entrance to The Anaconda Bar, which featured a long snake sculpture and a 1,000 gallon fish tank. The favorite margarita of the trip was called ” The Princkly Pear” a magenta colored drink that was like no other margarita I have tried! so good.

Just a small part of the spa, where I indulged in an amazing facial and pedicure. Numerous serums, Vitamin C wrinkle repair, creams, and hot towels were all a pair of this treatment. She also wrapped my hands and feet in steaming hot towels, while I relaxed. I could get used to this! 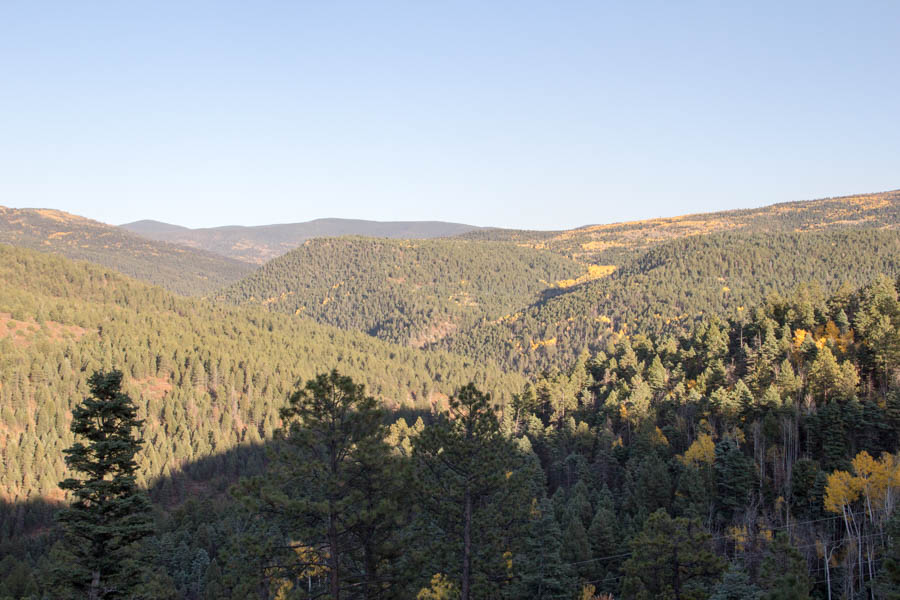 The landscape and scenery was breathtaking! 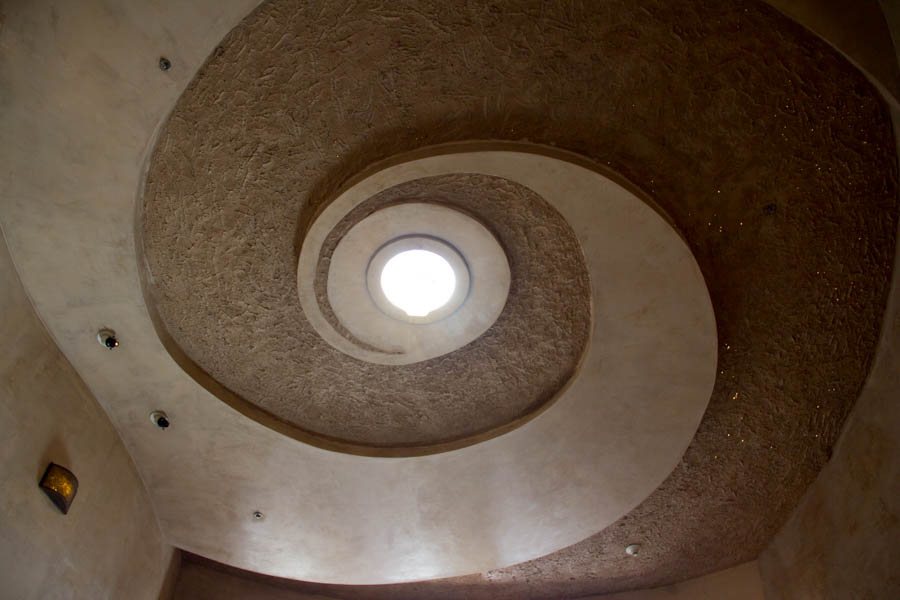 ( hotel ceiling) Entrance in the lobby.

The Gorge! I was able to look at this wonder of nature, but I am afraid of heights, so I did my best! 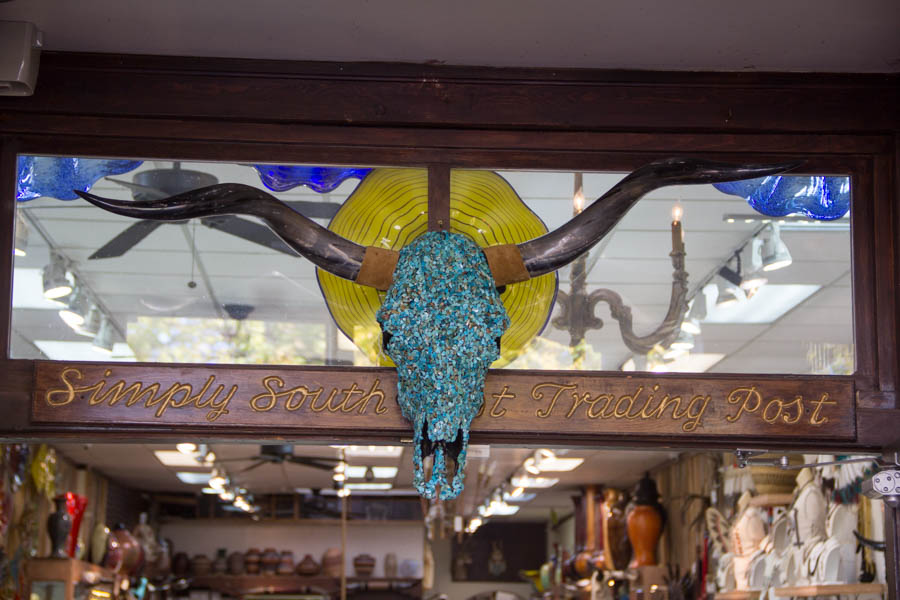 I want this above my fireplace! why not! Lots of interesting cultural sculptures and art in Santa Fe. View more pics on IG and next week on the blog. 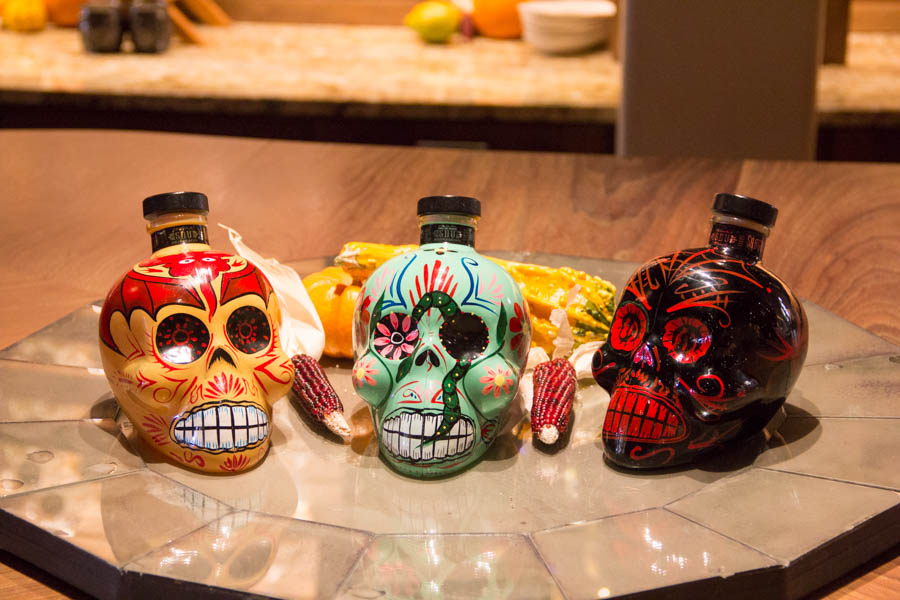 So rich with culture, it really felt like I was in another country, not state. Skulls were seen as a popular artistic image in various shops and hotels. 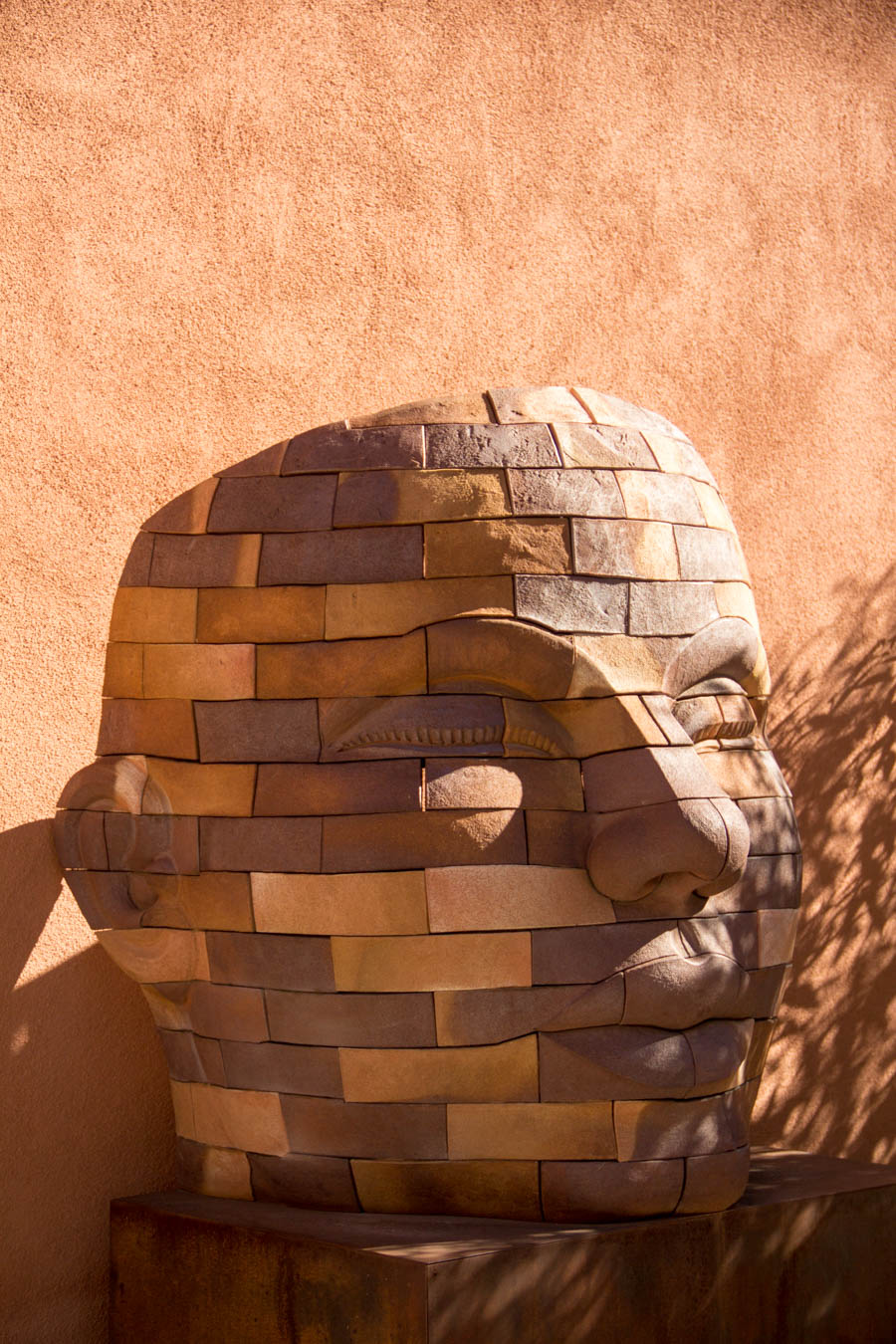 ( Just one of the hundreds of sculptures, metal art and paintings found on Canyon Road.)

As the grounds were spectacular with stone gardens and ponds, rock designs and metal statues, I am wearing my Zara burgundy velvet shift dress, brought a black ruffled cardigan for the chilly mornings, and am  wearing black patent leather block strappy heels also from Zara. It will be the base for other outfits as I plan on wearing it with other rich fall colors.   Most of the trip was causal dress, with the exception of a dress for dinner. More about Santa Fe and my trip on Part II-next week! We visited several vineyards, Taos Brewing for lunch,  took pictures at the Rio Grande and Gorge, and checked out the artisans and artwork at Canyon Road..Enjoyed the Roof Top hot tub in Sante Fe…. Hubby bought me a gorgeous necklace from Santa Fe in one of the many shops I will wear next week.

Ill be back to posting the Most Clicked and the Pinterest Pic of the Week, next week, as I get back to the “swing of things!”

Hello, My name is Jess and I am a 50 yr old fashion blogger who believes that fashion is all about expression and having fun. I have a Connective Tissue disease - Ehlers-Danlos and I want to tell you that it does not define me! I'm also here to tell you Fashion at 50 doesn't mean frumpy! I love color, mixing textures, wearing skirts and dresses ( mostly) and strive for a feminine look. I love Old Hollywood Hair. I live in NC with my husband and my other two loves: Gibson and Truffles, my two shih tzu fur babies. 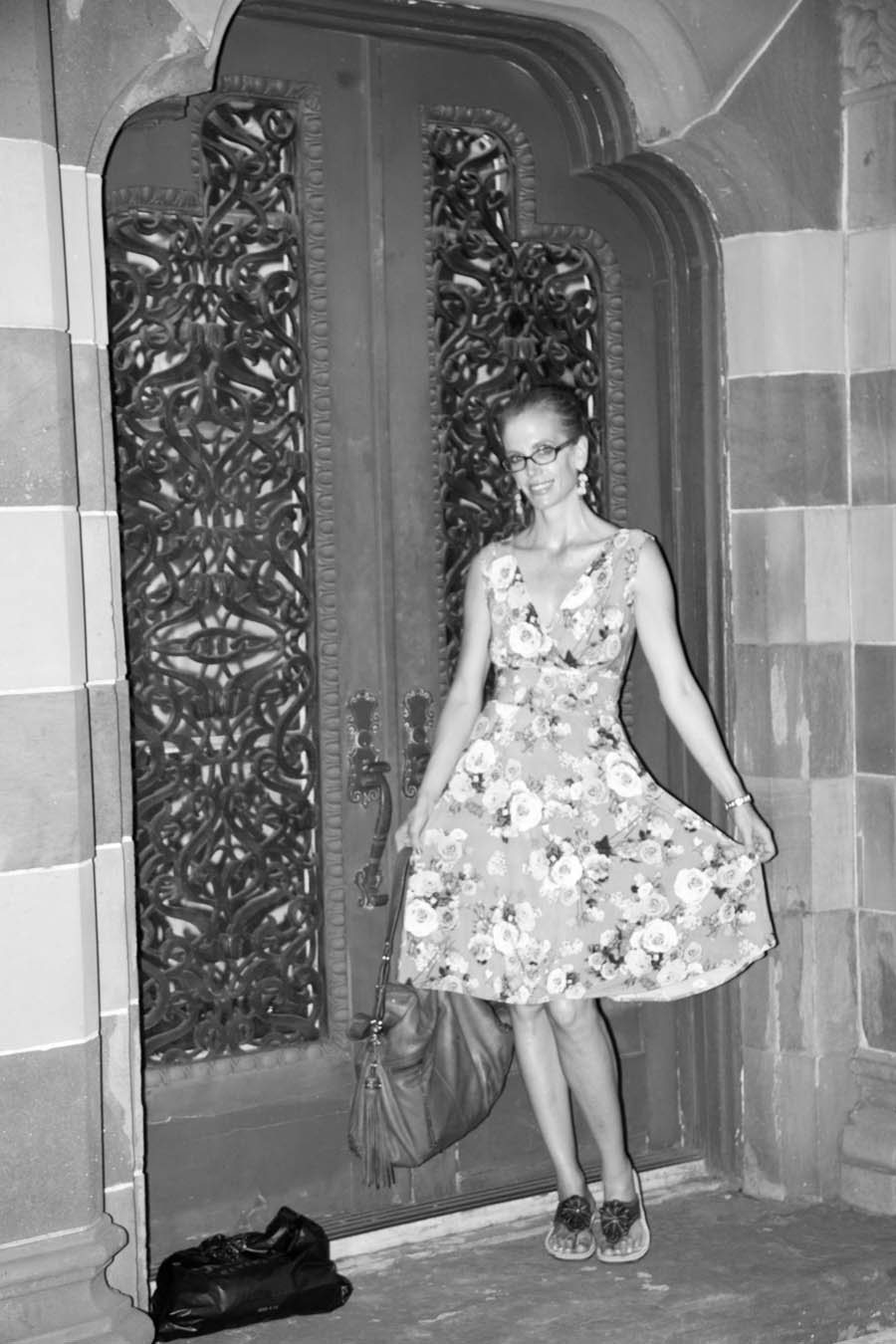 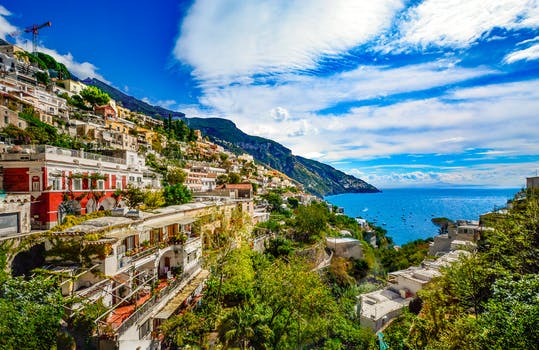 Phrases I Would Find Useful on A Trip to Italy

Hello! My name is Jess and I am an over 50 lady from NC! I love fashion and helping ladies to feel good about what they wear and how they feel! I love to write and enjoy sharing Midlife topics as well! I live with my hubby of nearly 20 years, and my two shihtzus- Gibson and Truffles. I am a HUGE dog lover!

Fall foliage is my favorite color. 😁 Not all

"Painted in the colors of Fall. " This was from a

"If you look deeply to nature, you'll find beauty